Every so often, we come across individuals seemingly by accident. But the more we get to know them, the more we realize it was no accident at all. It was on purpose. And that person’s life as it is displayed, causes us to believe in the genuine goodness of humanity in a new way. Today’s featured Upbeat Dad of the Week is one such individual. So let me say it gives me great honor to share with you the story of our Upbeat Dad of the Week is Chris Singer.


When I began the Upbeat Dad blog, one of the first things that became apparent to me was that there’s a whole world of fellow bloggers who have their own unique niche. In late September 2010, the day after I decided to start the blog, I saw a feature on CNN about “Dad bloggers” and I thought “How cool is that?” I was excited to know that there are other men like me who care enough to share their thoughts on fatherhood with others.
It was in this world of blogging fathers that I got to know Chris Singer. He runs the website Book Dads. On that site, he works with authors and book reviewers to publish reviews of children’s books. Here are his blog and other social media tools:
Blog: Stay at Home Dad in Lansing
Book Review site: Book Dads
Twitter: tessasdad and book_dads 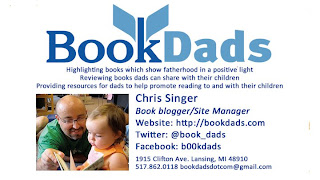 ﻿﻿﻿﻿﻿﻿My family and I had the awesome privilege of meeting the Singers as they visited South Florida just last week. And they are quite an impressive family. My wife was pleased to know that Chris had been asked to do some video work on a project in her home country of Haiti, but his trip was cancelled due to some unrest in the capital city, Port Au-Prince. He’s just the type of person you meet and you know that your life will forever be enhanced as a result of meeting him.
Please join me in celebrating the mission of one who I believe is a great man. He lives in a country where wealth and privilege are treated by many as their inherent right. Yet his greatest passion is eradicating poverty and hopelessness around the world.
His childhood was not the glamorous life that many have yet taken for granted. He had a difficult path to take but what a journey it’s been. One of the quotes that I have written is, “That which I thought was the death of me became the key to my victory.” That can be said of him. He channeled the negativity of his past to propel him to be an exceptional man – a loving husband and father and great humanitarian. For that, he ought to be applauded.
As always, if you would like to nominate someone – anyone – for our Upbeat Dad of the Week, please do so by sending an email to: info@theupbeatdad.com. Be sure to tune in next week Friday – and every Friday - for our Upbeat Dad of the Week.
Thanks for reading about Chris’ story. And I hope that, like him, you will use your gifts to enhance the lives of others within your sphere of influence.
Enjoy your day.
The Upbeat Dad
Posted by Rodrick Walters at 2:21 PM