The Story of My Blended Family by The Upbeat Dad 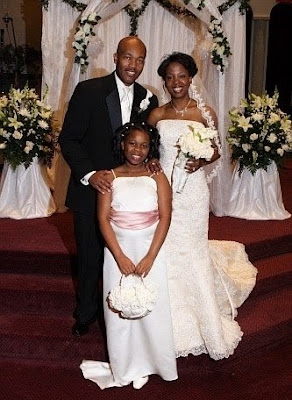 On the 21st of February, my wife and I will celebrate our wedding anniversary. We have a 5 month old son who, in my opinion, is a little angel sent from above. We also have a 12 year old – a daughter from my first marriage. To me, she is also an angel sent from above – an absolutely wonderful, adorable pre-teen. We are a happy family and I believe that we will remain that way. How did it happen so quickly and so easily? Suffice it to say, it didn’t happen overnight or accidentally. So today, I’ll share with you some thoughts on having a successful blended family.


About 4 years ago, my daughter, with whom I’ve always been close, came to live with me primarily. Prior to then, she lived with my former wife who moved back to her home state. When my daughter was with her mom, she always came to me whenever there was a break from school – summertime, Thanksgiving, Christmas and so on. Now that she was with me primarily, I was learning how to be a different kind of parent than I had been previously.

Now I had to deal with the daily grind of being a working single parent – getting her off to school, picking her up from school, making sure she gets her homework done, going to her school for conferences with teachers, becoming involved with the Parent Teachers Association, and the list goes on. All of this was a new experience for me. It was time-consuming but I cherished every minute of it.﻿﻿
A little over 3 years ago, I went out for the first time with a young lady whom I had no clue would soon become my wife. Have you ever heard it said that when you’re looking for love you never find it but when you’re not looking for it, it finds you? Well, that can be said of my wife and me. We met 4 years prior to then in the business world and to me, she was just another nice person who I knew. Our paths crossed occasionally over the next few years.

In late 2007 I called the office where she worked to speak with her boss. She answered the phone and we spoke long enough for her to tell me her birthday was coming up. I offered to take her to lunch. As it turned out, lunch became dinner and dinner became dancing. Over the next few weeks, a romance blossomed and it has grown into the love of a lifetime.
﻿﻿After I went through a divorce in the early 2000s, I had a few relationships over the next few years. But none were developed to the stage that I seriously contemplated marriage. As I wrote in the post, Dating 101 for the Divorced Dad, I didn’t want to bring any of these new individuals into my daughter’s life. So though she met some of them, she had no idea that we were in a relationship. To her, they were just like any other of her dad’s friends. I didn’t want her to bond with someone new, only to see that relationship end like her mom’s and mine.
With my newfound relationship, this time it was different. For the first time, I believed that I found the love of a lifetime. And my mind began looking towards the future. I thought of having a happy family with my daughter an integral part of it. I thought of having a wife with whom I can develop a loving relationship built on mutual respect.  I really began getting excited as I thought about all that could be. My new love and I talked about the future and we were on the same page, as the expression goes. The future was ours for the taking and everything was just perfect. Or so I thought.
When I told my daughter of our plans, she was not a happy camper. I remember sitting with her – just the two of us – and talking about the new family that was developing. She expressed that though she liked this new person in my life, she felt that for so many years she had me all to herself. The way that she described how she felt was almost artistic. She said, “All this time, I had your heart to myself. Now if you get married, your heart is gonna be divided in two – she gets one half and I get the other. Then if you have more children, my half is just gonna get smaller and smaller.” I was awestruck at just how she expressed such concern.
I assured her that just like before when her mom and I divorced, my love for her was immovable - it would never fade. I reminded her that through all the changes that took place in our lives over the years, there was one constant – she was my top priority and nothing could ever change that. I told her that if we have more children, I could never possibly have another first-born child. She is my first child and that fact is quite significant.
Then she started telling me about the nightmare scenarios she sees played out on TV. For instance, in the story of Cinderella, her father was a widower and got remarried. Cinderella’s stepmother and stepsisters were very cruel to her. My daughter also heard expressions like, “You get treated like a red-headed stepchild.” All of these things gave her cause for concern.
The beautiful thing is that neither my now-wife or me forced anything on her. We just let things flow. And as we interacted, my daughter began opening up to the idea that this might not be the hostile takeover of her dad that she feared. It was actually ok. We went to dinner and to the movies and really bonded. My then-fiancée was just as nice as she could be – not the wicked stepmother type that is portrayed in the movies.
﻿﻿﻿
Things went so great that as we began making wedding plans, my daughter was a part of that process. She went to the bridal store to look at the wedding dress. She and my niece were flower girls so they got excited as they tried on their custom fitted dresses. It was really a splendid process.

As we finalized the order of the service and reception, my daughter told me that she had prepared a speech and wanted to deliver it in front of everyone. The only catch is that she didn't want me to see it beforehand. She was only 10 at the time but I trusted that she'd do the job of a pro.

At the wedding and reception, we all had a wonderful time. Our parents and other loved ones were there to join us for this occasion of a lifetime! Then came what, in my opinion, was the highlight of the evening - when my daughter toasted me. She spoke of how happy she was that I got married to a wonderful woman. Then she said, “Instead of losing my dad, I’m keeping my dad and getting a wonderful new mom.” I admit that I teared up a bit as she shared those heartfelt words.
Throughout all of this, I have been very careful not to let my former wife feel as if she was being replaced in my daughter’s life. She has always been her mom and nothing could ever change that fact. So though there’s a new stepmother, there’s no threat of her being replaced. That process has gone well and everyone involved has been just fine. When my daughter graduated from elementary school, we all met together for the first time. It was actually a nice meeting and I think, for my daughter, it was a good thing to see that each of us loves her and we are all committed to her well-being.

In August 2010, our son was born. Our daughter was very involved throughout the pregnancy and she was as excited as ever when her baby brother was born. As I type this, she’s in front of me changing his diaper and loving every minute of it. She’s a great big sister in every imaginable way. We’re quite proud of her.﻿﻿
﻿﻿During our pre-marital counseling sessions, our pastor told me that I should schedule regular time with my daughter with just us two. So once a week, after school, we have what we call a “lunner” – a light meal between lunch and dinner. She looks forward to it, as do I. And my wife fully embraces that special bonding time. That has helped so much in us having a smooth transition into our happy blended family.
I hope that you have enjoyed reading just how our family has come together. I don’t share it just for the sake of sharing it. There are lessons and tips embedded in our story that I believe others can learn from. Divorce is very much a part of our world today. And kids from these former marriages can become vulnerable as their parents enter new relationships.

For those of us fortunate to find love again, it’s important to choose wisely because the persons we bring into our kids’ lives will have an impact on them. When I got married for the first time in the mid 90s, the last thing I envisioned was one day having a blended family. Yet, here we are today. This is my reality so I had to make the best of it.
As I always say, our kids are top priority and the decisions that we make each day can have a lasting impact on them. If you’re in a blended family, I hope that this post has given you some good tips. And if you know of others who are in blended families or contemplating new relationships, do share this post with them. I believe that they will benefit.
Always shower your kids with love regardless of the situation or circumstance. They’re our top priority so let’s ensure that with the changes that we go through, the one constant should be our unchanging love for them.
I hope that you enjoy a great and productive day.

The Upbeat Dad
Posted by Rodrick Walters at 11:53 PM