Each Friday at the Upbeat Dad, we honor a father who has displayed exceptional attributes that endear his kids and others to him. These features are some of our most read posts. So often we hear about what’s wrong with men; but the men that we feature are not your stereotypical uninvolved, absentee dads that we read and hear about. These men are involved, enthusiastic and excited about their roles as fathers.
Today’s feature is one that I have mixed feelings about as I write. You see, this is the first father who we are honoring posthumously. I hope that after reading this post, you would embrace the gift of life that each of us has and that you would touch the lives and hearts of those in your sphere of influence. Our featured dad this week is one who embraced this principle and that is why we have chosen to share his very touching story. It is with great honor that I say that our Upbeat Dad of the Week is Doug Clarke.
﻿I did not have the privilege of meeting Doug face to face. But as I began getting involved with social media a couple of years ago, I saw that he was in a network of friends who attended the school in Jamaica that I attended just before migrating to the United States in the early 80s. I learned that he also attended the school several years before me. We made contact and really hit it off. ﻿﻿﻿﻿
﻿﻿

He was the type of person who you meet for the first time and you just believe that you’ve known him for all of your life. He was 15 years my senior but he was just a down to earth, friendly brother. I had the privilege of speaking with him on the phone a few times. And though we planned to meet at different events that our former school had in Florida, New York and Canada, it never materialized. Doug so endeared himself to those he met that just by knowing him, it was easy to embrace the good that there is in this world.﻿﻿
Originally from Jamaica, Doug lived in New York with his wife of 21 years. Their marriage produced one child – a girl, who is currently 16 years old. At his core, he was a family man. His life and his life’s work centered around the family and community involvement. For many years, he was a service manager with the Toyota Motor Company. Still, he was always involved in the community through his church and his fraternity. He believed in giving of himself to impact the lives of others in a positive and meaningful way. 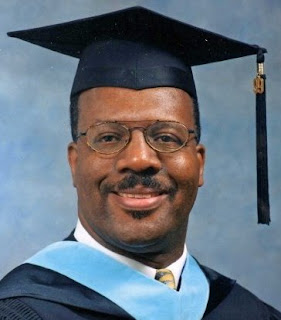 ﻿﻿In the mid 90s, Doug felt that, though he enjoyed a fulfilling career that afforded him the privilege of taking care of his family, he wanted to impact the lives of young people in a more meaningful way. And the way that he thought would be most ideal was through the formal education system. So he resigned from his job and went back to school to get a Masters degree in Education. He did so, knowing that he would likely not make as much money but he believed that his life would have greater impact by teaching those who will become the leaders of tomorrow. He, in fact, did end up making less money - $20,000 less, to be exact. But he loved every minute of it.
﻿﻿

As a high school teacher, he became very involved in the lives of his students. He was seen as a mentor, a counselor and a father figure to his students. So many of them, particularly boys, didn’t have a father in the home or even a father figure in their life. Doug became that father and friend. He was the biological father of one child but he fathered so many more.
For 10 years he taught in the classroom and for 3 years he was an assistant principal. By becoming involved at this level, he was able to help steer young people in the right direction before they made some of the mistakes that so many make. He was a reservoir of knowledge on so many different subjects so he would listen to his students tell of their life goals and he would help them chart the course for their success. So many young men and women today owe a significant part of their success in education and in life to the lessons they learned from “Mr. Clarke.”
His family was his pride and joy. His wife, Ann Marie – who I interviewed for this article – tells of how his entire life was consumed with her and their daughter. When he became an educator, he and his wife worked at the same school. Each day, the family of 3 would commute, bonding along the way.
﻿﻿﻿﻿His daughter was his world. Every activity she was involved in, he was also an integral part. Whether it was the Girl Scouts, church activities or other social activities, he was right there in the midst of it. He touched the lives of so many young people that having his own child was something that he saw as a privilege and an honor.


He taught her the importance of community involvement. She accompanied him as he did activities such as feeding the homeless and giving out water to runners in the New York City Marathon. He demonstrated, not only in word, but also in deed, what it means to be involved in the community and in the family.﻿﻿
In 2006, Doug noted that he developed a pain in his hip. Not sure what was causing the problem, he sought the input of medical professionals. It was then that he was diagnosed with multiple myeloma, a form of bone cancer. He underwent the recommended treatment and the cancer seemed to have subsided. In early 2010, however, the disease returned and was much more aggressive. This time, in early September, it claimed his life at the relatively young age of 55. He is survived by his wife, daughter, mother, 4 sisters and several cousins, all with whom he was very close. He also left behind scores of friends and admirers around the world.

For so many of us who knew Doug, we never even knew that he was ill. To us, it was like the manifestation of the term, “Here today, gone tomorrow.” Michael Jackson sang the song, “Gone too soon,” and I think that this applies to Doug and his great life.﻿﻿
As I interviewed his widow for this article, I asked her what one word she would use to describe Doug. Her response was, “Satisfied.” She went on to explain, “He was satisfied with life. He was satisfied with his family and his work. And he was satisfied that his soul was at peace. He was just satisfied.”
﻿She tells of something quite significant as Doug laid in the hospital towards the end of his life. When the hospital chaplain came to the room to speak with him, knowing that he had a terminal illness and was near the end of his journey, the chaplain asked him, “Do you ever ask the question, ‘Why me?’” His response to her was, “Why not me? I’m no better than anyone else. I have been blessed with so much and I have friends and family that love me. These things happen to people all the time, so why not me?” He indeed fought a valiant battle and was brave as he faced his departure.


In his last days, he was still the loving family man he always was. When his wife came to see him, he always left some of his meal for her, thinking she might be hungry. His daughter was broken hearted, seeing her father in that state. As she cried, he consoled her and prayed with her. He even got her to smile before leaving his room for the last time.﻿
It is said that a good man’s works outlive him. That can certainly be said of Doug Clarke.  People continually share stories of the lasting impression that he made on their lives. And in December 2010, his fraternity, Phi Beta Sigma, at their 90th anniversary banquet, renamed their annual scholarship, which is awarded to students pursuing higher education, The Douglas Clarke Memorial Scholarship. How fitting a tribute for a man who championed the cause for students to get an education that could help them to achieve their life goals.
I wrote earlier that it is with mixed emotions that I pay tribute to Doug in this way. I hate the fact that he is gone. Yet, I am honored to have known him, if only for a short while. His work goes on and he’s still touching lives today. Billy Joel sang, “Only the good die young.” His 55 years were very well spent and in my opinion, he touched more lives in those years than many do for an entire lifetime.
I hope that you have been moved and encouraged by learning of the life of this great man. And I hope that his story will inspire you to be of service to your fellowmen. In my poem, A Lasting Legacy

, I wrote:
Whenever I come to the end of my days
And I go to my final resting place
When the sun goes down and I finish this race
May I leave this world a better place.
This is my vow to humanity
A vow that will last all eternity
For my children and all who will come after me
May I leave a lasting legacy.
I believe that Doug Clarke has left a legacy that will live on perpetually. I know that my life has been enhanced by his story and I trust that yours has been as well.
As always, if you would like to nominate someone to be featured as our Upbeat Dad of the Week, please do so by sending an email to: info@theupbeatdad.com. You can nominate your dad, friend or loved one. You can even nominate yourself. We’re all about featuring those who embody the good things about fatherhood.
Today, please reflect on the life that Doug lived. And, in your own way, commit to sharing your gifts to enhance the lives of others.

Posted by Rodrick Walters at 2:00 PM